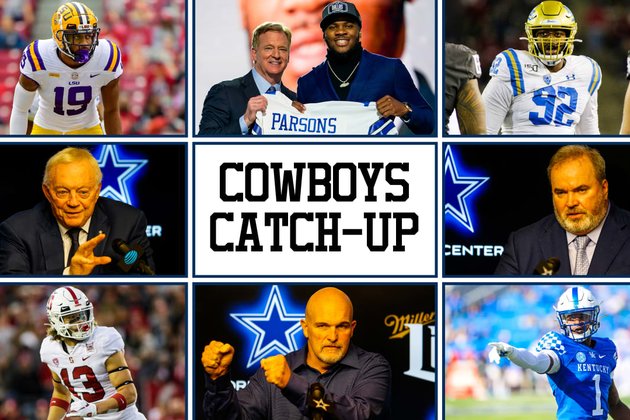 Each week, Cowboys Catch-Up will be your spot to look back on the week that was for Cowboys Nation, reviewing some of the top stories and videos of the week. Today, we're doing a special Monday edition of the Catch-Up to bring you up to speed on everything that happened from Thursday evening to Sunday.

Who did the Cowboys draft? Where did they come from? How do they fit? What did they have to say? DallasCowboys.com had you covered. We'll be back to our normal Friday schedule later this week.

Hours before the draft, the staff writers did their annual 7-round mock draft, predicting not only the first pick, but all 10. As it turned out, the Cowboys made 11 picks, but only one of the names showed up in a mock draft. Here is the Cowboys' 7-Round Mock Draft. No one knew who the Cowboys would draft in the first round, and when the pick came it was Micah Parsons. "Parsons jumps into a position that needs a playmaker," Nick Eatman writes. "Dan Quinn's defensive strategy is somewhat unclear at the moment but you can bet Parsons will have a big role, especially in the nickel situations. [Eatman explains how Parsons fits with the Cowboys] You can go back and forth on just about any first-round pick, but Nick Eatman likes what the Cowboys did Thursday night. "I don't know if you call anyone "unblockable" but every clip I saw was Parsons busting through the line of scrimmage either on a blitz or just his instincts that get him to the ball," Eatman writes. [Eatman on why Thursday night was "win-win" for the Cowboys]

Micah Parsons had to answer questions about incidents beyond the field. "Even without a scouting combine to do a thorough interview process with Parsons in person, the Cowboys made sure they found out all the details of the situation," Nick Eatman writes [Eatman on why Parsons says Cowboys aren't worried about his character] 2021 won't be the first time Parsons steps into AT&T Stadium. "He had a dominant performance as the 2019 Cotton Bowl MVP against Memphis," Jonny Auping writes. "That was when the notion of being a Dallas Cowboy became something he envisioned for himself." [Auping on Parsons "finishing what he started"] The Cowboys traded with the Philadelphia Eagles before drafting Parsons, but it's not the first time they've made such a move. "In fact, the Cowboys have landed some Pro Bowlers, including a Hall of Famer, based off a trade within the NFC East," Nick Eatman writes [Eatman on the times trades within the NFC East have worked out for the Cowboys] No one expected the Cowboys to draft Kelvin Joseph in the second round. "Joseph only started one season in college, but he likely will compete for playing time at outside corner as a physical, athletic coverage player with a knack for making plays on the football," Rob Phillips writes. [Phillips on what Joseph adds to the secondary] Dallas addressed their defensive line in the third round by drafting Osa Odighizuwa. "Odighizuwa will have a chance to compete for snaps, and he showed versatility by playing multiple positions for the Bruins," Rob Phillips writes. [Phillips on Ofighuzuwa's boost to the D-line] They followed up adding a defensive tackle with adding a defensive end with their next pick of Chauncey Golston. "Not a highly-recruited player at first, but over his four seasons on the field, he became a problem for opposing offensive lines," Nick Eatman writes. [Eatman on how Golston will fit in Dallas.] By the end of Friday night, the Cowboys had drafted their second cornerback when they selected Nashon Wright. "At 6-4, Wright has a unique frame for the position and the length to disrupt receivers at the line of scrimmage," Rob Phillips writes. [Phillips on the Cowboys adding another cornerback]

The Cowboys had already drafted a linebacker, but they couldn't pass up Jabril Cox on Saturday. "Based on pre-draft projections, Cox might prove to be a steal in the fourth round," Rob Phillips writes. "Many observers had him ranked as early as the second round." [Phillips on the versatility that Cox brings to the defense] It took 138 picks, but the Cowboys finally picked an offensive player when they drafted Josh Ball, an offensive tackle out of Marshall [Rob Phillips on what Ball brings to the team] Before transferring to LSU, Jabril Cox became very familiar with Frisco. "The FCS State Championship game is held at Toyota Stadium, right next to The Star in Frisco, and Cox's North Dakota State Bison always left the area happy," Jonny Auping writes [Auping on Cox's journey to the Cowboys] Size helps in the secondary, so the Cowboys took another one in the sixth round with Israel Mukuamu. "In fact, Wright and Mukuamu happen to be the tallest corners in this year's class," Rob Phillips writes [Phillips on cornerback trend] Defensive tackle Quinton Bohanna is big, and by all accounts, going to be fun to watch. [Watch Bohanna's draft hype video]

Defense dominated the draft for the Cowboys, so it made sense for defensive coordinator Dan Quinn to hold a press conference when it was all said and done. [Check out four first impressions from Dan Quinn after the draft] The Cowboys drafted 11 players and each of them spoke to the media moments after their dreams came true. [Check out some of the best draft night quotes from all 11 Cowboy picks] Not every rookie comes out of the NFL Draft. The Cowboys aren't finished adding to their team. [Check out the 13 undrafted free agents Dallas is expected to sign] Kyle Youmans and Bill Jones broke down the entire draft, including interviews with Micah Parsons and Mike McCarthy [Watch a special edition of The Blitz]